Unlike the majority of industrial projects that can absorb the entire thermal output of a CHP system onsite, many commercial sites have either an inadequate thermal load or a highly seasonal load such as space heating. The best overall efficiency and economics come from a steady thermal load. These loads are concentrated in relatively few types of commercial applications. These have been the focus of the traditional commercial/institutional CHP market (e.g., education, hospitals, and hotels).

Reciprocating internal combustion engines are a widespread and well-known technology. Worldwide production for reciprocating internal combustion engines is over 200 million units per year. This includes both diesel and spark ignition configurations and they are important for both transportation and stationary uses. The long history of technical development and high production levels have contributed to making reciprocating engines a rugged, reliable, and economic choice as a prime mover for CHP applications. 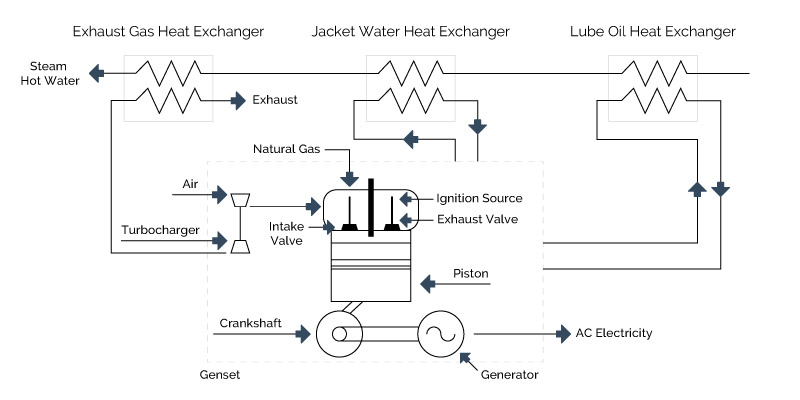 There are two primary reciprocating engine designs relevant to stationary power generation applications – the spark ignition Otto-cycle engine and the compression ignition Diesel-cycle engine. The essential mechanical components of the Otto-cycle and Diesel-cycle are the same. The primary difference between the Otto and Diesel cycles is the method of igniting the fuel. Spark ignition engines (Otto-cycle) use a spark plug to ignite a pre-mixed air fuel mixture introduced into the cylinder. Compression ignition engines (Diesel-cycle) compress the air introduced into the cylinder to a high pressure, raising its temperature to the auto-ignition temperature of the fuel which is injected at high pressure.

There are 2-cycle engines in stationary power applications, particularly in standby service. However, most spark ignition and the diesel engines relevant to stationary power generation applications complete a power cycle in four strokes of the piston within the cylinder.

The simplest natural gas engines operate with natural aspiration of air and fuel into the cylinder (via a carburetor or other mixer) by the suction of the intake stroke. High performance natural gas engines are turbocharged to force more air into the cylinders. Natural gas spark ignition engines operate at modest compression ratios (compared with diesel engines) in the range of 9:1 to 12:1 depending on engine design and turbocharging. Modest compression is required to prevent auto-ignition of the fuel and engine knock, which can cause serious engine damage.

Dual fuel engines are predominantly fueled by natural gas with a small percentage of diesel oil added. There are two main configurations for introducing the gaseous fuel in a dual fuel engine. These engines can be purpose built or conversions of diesel engines. Such engines can be switched to 100% diesel operation. Dual fuel engines provide a multi-use functionality. Operation on predominantly cheaper and cleaner burning natural gas allows the engine to be used in CHP and peak shaving applications, while operation on 100% diesel allows the engine to also meet the onsite fuel requirements of emergency generators. The dual function adds benefit in applications that have specific emergency generator requirements such as in hospitals or in public buildings.

There are three main configurations for introducing the gaseous and pilot diesel fuel:

The ratings shown here are for baseload operation.

Emissions of criteria pollutantss are the primary environmental concern with reciprocating engines. The primary pollutants are oxides of nitrogen (NO x), carbon monoxide (CO), and volatile organic compounds (VOCs – unburned, non-methane hydrocarbons) with reciprocating engines operating on natural gas. Emissions of sulfur compounds, primarily SO 2, are related to the sulfur content of the fuel. Engines operating on natural gas or distillate oil, which has been desulfurized in the refinery, emit insignificant levels of SO x. In general, SO x emissions are an issue only in large, slow speed diesels firing heavy oils. Particulate matter (PM) can be an important pollutant for engines using liquid fuels. Ash and metallic additives in the fuel contribute to PM in the exhaust. Particulate emissions from 4-stroke lean burn natural gas engines are 4,000 times lower than for an uncontrolled diesel engine.

The three-way conversion process (TWC) is the basic automotive catalytic converter process that reduces concentrations of all three criteria pollutants. The TWC is also called non-selective Catalytic Reduction (NSCR). In a properly controlled TWC system, NO x and CO reductions are generally greater than 90% and VOCs are reduced about 80%. TWCs are only effective in rich-burning engines.

Lean burn engines equipped with selective catalytic reduction (SCR) technology selectively reduces NO x to N 2 in the presence of a reducing agent. NO x reductions of 80 to 90% are achievable with SCR. Higher reductions are possible with the use of more catalyst or more reducing agent, or both. The two agents used commercially are ammonia (NH 3 in anhydrous liquid form or aqueous solution) and aqueous urea. Urea decomposes in the hot exhaust gas and SCR reactor, releasing ammonia.

SCR systems add a significant cost burden to the installation cost and maintenance cost of an engine system, and can severely impact the economic feasibility of smaller engine projects. Oxidation catalysts generally are precious metal compounds that promote oxidation of CO and hydrocarbons to CO 2 and H 2 O in the presence of excess O2. CO and NMHC conversion levels of 98 to 99% are achievable. Methane conversion may approach 60 to 70%. Oxidation catalysts are now widely used with all types of engines, including diesel engines. They are being used increasingly with lean burn gas engines to reduce their relatively high CO and hydrocarbon emissions.

The economics of engines in on-site power generation applications often depend on effective use of the thermal energy contained in the exhaust gas and cooling systems, which generally represents 60 to 70 % of the inlet fuel energy. Most of the waste heat is available in the engine exhaust and jacket coolant, while smaller amounts can be recovered from the lube oil cooler and the turbocharger’s intercooler and aftercooler (if so equipped). As shown in the previous table, 45 to 55% of the waste heat from engine systems is recovered from jacket cooling water and lube oil cooling systems at a temperature too low to produce steam. This feature is generally less critical in commercial/institutional applications where it is more common to have hot water thermal loads. Steam can be produced from the exhaust heat if required (maximum pressure of 400 psig), but if no hot water is needed, the amount of heat recovered from the engine is reduced and total CHP system efficiency drops accordingly.

Heat in the engine jacket coolant accounts for up to 30% of the energy input and is capable of producing 190 to 230° F hot water. Some engines, such as those with high pressure or ebullient cooling systems, can operate with water jacket temperatures of up to 265° F. Engine exhaust heat represents 30 to 50% of the available waste heat. Exhaust temperatures for the example systems range from 720 to 1000° F. By recovering heat in the cooling systems and exhaust, around 80% of the fuel’s energy can be effectively utilized to produce both power and useful thermal energy.

The most common method of recovering engine heat is the closed-loop cooling system as shown in Figure 4-2. These systems are designed to cool the engine by forced circulation of a coolant through engine passages and an external heat exchanger. An excess heat exchanger transfers engine heat to a cooling tower or a radiator when there is excess heat generated. Closed-loop water cooling systems can operate at coolant temperatures from 190 to 250° F. Depending on the engine and CHP system’s requirements, the lube oil cooling and turbocharger after cooling may be either separate or part of the jacket cooling system. 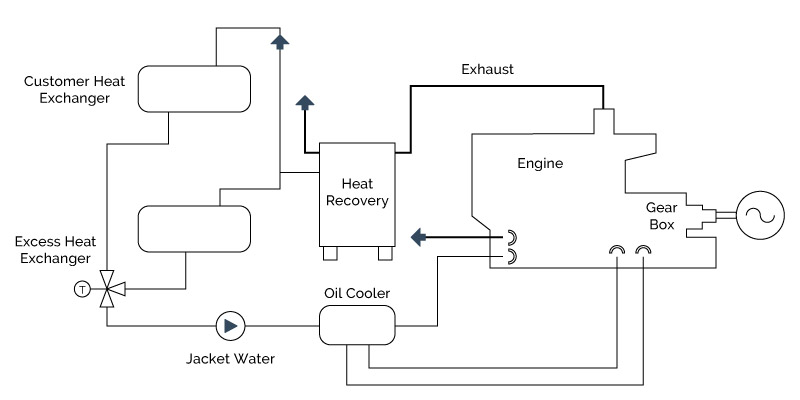 Ebullient cooling systems cool the engine by natural circulation of a boiling coolant through the engine. This type of cooling system is typically used in conjunction with exhaust heat recovery for production of low-pressure steam.

The coolant at the engine outlet is maintained at saturated steam conditions and is usually limited to 250°F and a maximum of 15 psig. Inlet cooling water is also near saturation conditions and is generally 2 to 3°F below the outlet temperature. The uniform temperature throughout the coolant circuit extends engine life and contributes to improved combustion efficiencies.

Exhaust heat recovery can be independent of the engine cooling system or coupled with it. In a typical district heating system, jacket cooling, lube oil cooling, single stage aftercooling and exhaust gas heat recovery are all integrated for steam production.

Thermal loads most amenable to engine-driven CHP systems in commercial/institutional buildings are space heating and hot water requirements. The simplest thermal load to supply is hot water. Primary applications for CHP in the commercial/institutional sectors are those building types with relatively high and coincident electric and hot water demand such as colleges and universities, hospitals and nursing homes, and lodging. Office buildings, and certain warehousing and mercantile/service applications can be economic applications for CHP if space heating or cooling needs can be incorporated.

A typical commercial application for reciprocating engine CHP is a hospital or health care facility with a 1 MW CHP system comprised of multiple 200 to 300 kW natural gas engine gensets. The system is designed to satisfy the baseload electric needs of the facility. Approximately 1.6 MW thermal (MW th) of hot water is recovered from engine exhaust and engine cooling systems to provide space heating and domestic hot water to the facility, and to drive absorption chillers for space conditioning during summer months. Overall efficiency of this type of CHP system can exceed 70%.

Engine-driven CHP can be used in a variety of industrial applications where hot water or low pressure steam is required for process needs or space heating. A typical industrial application for engine CHP would be a food processing plant with a 2 MW natural gas engine-driven CHP system comprised of multiple 500 to 800 kW engine gensets. The system provides baseload power to the facility and approximately 2.2 MW th low pressure steam for process heating and washdown. Overall efficiency for a CHP system of this type approaches 75%.

The economics of engines in on-site power generation applications often depend on effective use of the thermal energy contained in the exhaust gas and cooling systems, which generally represents 60 to 70% of the inlet fuel energy. Most of the waste heat is available in the engine exhaust and jacket coolant, while smaller amounts can be recovered from the lube oil cooler and the turbocharger’s intercooler and aftercooler (if so equipped). The most common use of this heat is to generate hot water or low pressure steam for process use or for space heating, process needs, domestic hot water or absorption cooling. However, the engine exhaust gases can also be used as a source of direct energy for drying or other direct heat processes.

Heat in the engine jacket coolant accounts for up to 30% of the energy input and is capable of producing 200 to 210°F hot water. Some engines, such as those with high pressure or ebullient cooling systems, can operate with water jacket temperatures up to 265°F. Engine exhaust heat represents from 30 to 50% of the available waste heat. Exhaust temperatures of 850 to 1200°F are typical. By recovering heat in the cooling systems and exhaust, approximately 60 to 70% of the fuel’s energy can be effectively utilized to produce both power and useful thermal energy.