﻿ How to get almost 1/3 of the cost of your Combined Heat & Power (CHP) capital costs back in the first year of operation through tax incentives - UnderstandingCHP.com

CHP or Cogeneration is simply the generation of electricity and use of the waste heat that is created during the process of making electricity. Businesses love CHP for the money saved on energy costs, energy independence and resiliency. There are capital costs associated with CHP and it’s a great day when we can find money that isn’t our own to help offset some of the capital costs associated with installing CHP. Some states and/or utilities offer incentives for CHP or special rates to those that generate their own electricity and utilize the waste heat in a CHP application. 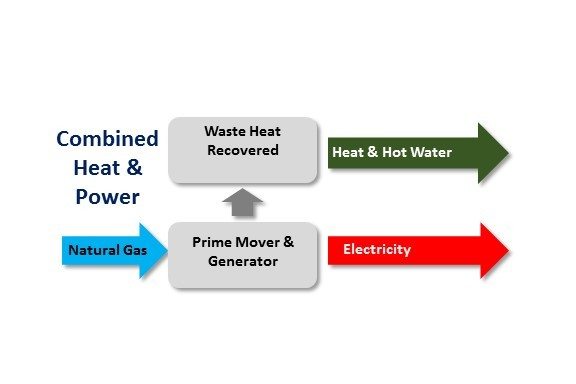 Outside of the local or state incentives, U.S. businesses can recover almost a 1/3 of the cost of their CHP System the very first year of operation. Several people have asked me what the ‘bonus depreciation’ is all about and why it would make a difference, so here is a short explanation of how a customer can get approx. 31% of their capital costs back in year 1, provided certain criteria are met.

Let’s start with the easy #. The Bipartisan Budget Act of 2018 re-instates the 2008 Energy Extension & Improvement Act which included a 10% tax incentive for CHP. OK 10% of our capital costs come back with the first tax return after the CHP system is installed, provided of course that we pay federal taxes and that the taxes paid exceed the 10% we are trying to recover.

Now let’s look at the new rules around depreciation and how that impacts a company’s bottom line. Depreciation is a normal accounting practice that allows a business to write off certain capital expenses against income so that they in effect pay lower taxes on revenue earned due to business expenses. In a typical depreciation scenario, the business takes the capital cost of equipment less the residual value of the equipment at the end of its useful life and divides that number by the expected life of the system, such as 20 years. This amount is written off against income each year for the next 20 years.

The newer Bonus Depreciation or Section 179 of the tax code allows for 100% depreciation in the 1st year for capital expenses. The Washington, D.C. hope is to motivate businesses to spending money on plant improvements, etc that then has a trickledown effect creating more jobs and so on. These newer rules are planned to end (sunset) in 2025.

The ability to depreciate all CHP capital costs in 1 year is like found money that can offset the total installed cost. Granted, you are entitled to get this money back regardless, it might just take 20 years to do so. I’ll save the time value of money discussion for another day other than to say, accountants and financial people would rather have the dollar today than over a period of years.

Here is an example of the value equation we are talking about. Let’s use a $200K installed cost for a CHP system and assume a typical business pays around 21% federal income tax beginning in 2018.

I do need to add a caveat that this is an over simplified example and there are a lot of factors that can impact whether you are entitled to recover 31% of your CHP investment in the first year. If the value being depreciated is greater than your income, you should depreciate the capital cost over more than 1 year to maximize your tax benefits. There are also limits that may enter the equation for larger expenditures and so on such as a caps to this program. The 2018 maximum deduction is $1,000,000 and the maximum capital expense id $2,500,000.  Additional details of Section 179 can be found at: http://www.section179.org/section_179_deduction/

I hope this example explains the available tax incentives and that if you are considering CHP, these federal incentives are what you need to make the decision to install CHP. If you are interested in more information on CHP, there is a wealth of information including a simple payback tool at www.understandingchp.com